Library members have reviewed their favourite library books over the past year.   For these titles and more, consult the library’s on-line  Catalogue.

For those who enjoy a book about strong women and how they managed in tough times.

A journey of love and tragedy as a couple embark on a river trip to battle and overcome the challenges of cancer that threatens their future.

This traces the story of two women born on the same day at the same hospital. Their background, lives and personalities are very different. The story is told in alternating voices of Ruth and Dana revealing the ways their lives parallel and intersect.

An intriguing mystery set in Denmark when a young nurse picks up a suitcase in a public locker and finds a three year old boy inside. A dangerous and surprising tale unfolds as the identity of the boy is revealed.

Set in the 1920’s and 30’s in Kansas and New York, this is a story about the changing social morals of the time when Cora, a middle aged chaperone with secrets of her own accompanies a beautiful talented and spirited 15 year old  dancing student to New York. The books follows as their lives unfold and encompasses orphan trains, prohibition, flappers, the Great Depression and new opportunities for women’s rights.

A historical novel based in 70 CE when 900 Jews held out against Roman armies in the Judean dessert. It follows the survival of four strong independent women who worked as dovekeepers in ancient Israel.

A fascinating story set in India that tells of an unlikely friendship between two young girls separated by the caste system and complicated by tradition and family. It involves kidnapping, escape to America, and the dangerous world of human trafficking.

This is a novel about women and about the bonds between them. It is a story about friendship, personal growth, fear, love and faith. Ann Stanley and Ruth Thomas are in their early 40s, and are the best of friends. When Ruth is diagnosed with breast cancer, she, Ann, and a small group of friends find their world turned upside down. They are forced to deal with the painful reality of Ruth’s illness, and the shocking fragility of her mortality.

For those who enjoy biographies of people who grew up/made a life in a different culture.

Thomas King’s “The Inconvenient Indian” a very insightful view on how North Americans, both native and non-native have come to this place at this time…now.

It was written by a native and his opinions and arguments are extremely well thought out (6 years in research and writing) and he has managed to lay it all out in such a way that will keep you turning pages. Riddled with humorous anecdotes and undeniable facts he weaves the plight of the natives in a real and understandable way that few, if any, have to date.

Indian Horse is the story of Saul Indian Horse, a young Ojibway boy whose life is thrown into turmoil at the loss of his family. Forced into a Catholic Residential School, he endures the horrors of cruelty, abuse, neglect, and the stripping of his culture at the hands of the nuns and priests. His only escape is through books and in the game of hockey.

Saul is a broken soul, and yet we see in him a glimpse of hope and redemption, drawn from his aboriginal culture and the strength and self-awareness he developed as his life unfolded. I would highly recommend the book.

For those who are in it for the romance

The Castaways by Elin Hilderbrand

In a sailing accident off Nantucket Island, a couple drowns, leaving behind two small children as well as the three couples who have long been their closest friends.  The tragedy brings to the surface long-simmering conflicts and emotions, and the six grieving friends find themselves unprepared for the revelation of secret upon secret as they struggle to answer the question, “what happened to Greg and Tess?”

The Upside of Falling Down by Rebekah Crane

For Clementine Haas, finding herself is more than a nice idea. Ever since she woke up in an Irish hospital with complete amnesia, self-discovery has become her mission.  They tell her she’s the lone survivor of a plane crash. They tell her she’s lucky to be alive. But she doesn’t feel lucky. She feels…lost.  With the relentless Irish press bearing down on her, and a father she may not even recognize on his way from America to take her home, Clementine assumes a new identity and enlists a blue-eyed Irish stranger, Kieran O’Connell, to help her escape her forgotten life…and start a new one.

Stars of Fortune, Bay of Sighs, Island of Glass by Nora Roberts

Like some of Robert’s other trilogy books, the series follows a group of people (with special “powers”) on a quest to conquer evil.  Sasha Riggs is a reclusive artist, haunted by nightmares that she turns into extraordinary paintings. Her visions lead her to the Greek island of Corfu, where five others have been lured to seek the fire star. Sasha recognizes them, because she has drawn them: a magician, an archaeologist, a wanderer, a fighter, a loner. Sasha is the one who holds them together—the seer.

A whodunit at the race track, Dick Francis is your man.

The multi-million pound Stratton Park racecourse in Wiltshire faces ruin in the hands of a squabbling family. Lee Morris, architect, builder, and father of six sons, is reluctantly drawn into the turmoil.  As the Strattons fight for control in the boardroom, Lee finds himself more and more invested in the future of the racecourse. Until the day a massive explosion on the racecourse threatens his life and the lives of his children.

What was it like on a travelling circus in the 1930’s?

Water For Elephants by Sara Gruen

Orphaned and penniless at the height of the Depression, Jacob Jankowski escapes everything he knows by jumping on a passing train-and inadvertently runs away with the circus. So begins Water for Elephants, Sara Gruen’s darkly beautiful tale about the characters who inhabit the less-than-greatest show on earth.

Jacob finds a place tending the circus animals, including a seemingly untrainable elephant named Rosie. He also comes to know Marlena, the star of the equestrian act-and wife of August, a charismatic but cruel animal trainer. Caught between his love for Marlena and his need to belong in the crazy family of travelling performers, Jacob is freed only by a murderous secret that will bring the big top down.

John Grisham, normally writing about crimes within the legal profession, writes about a football player in Italy (wha?)

Playing For Pizza by John Grisham

Third-string Cleveland Browns quarterback Rick Dockery becomes the greatest goat ever by throwing three interceptions in the closing minutes of the AFC championship game. Fleeing vengeful fans, he finds refuge in the grungiest corner of professional football, the Italian National Football League as quarterback of the inept but full-of-heart Parma Panthers. What ensues is a winsome football fable, replete with team bonding and character-building as the underdog Panthers challenge the powerhouse Bergamo Lions for a shot at the Italian Superbowl.

An escapist, comic spy novel.  Freelance journalist Olivia Joules gets bumped from the Sunday Times’s international coverage down to the style pages thanks to her titular imagination (e.g., a story about a “cloud of giant, fanged locusts pancaking down on Ethiopia”). In between ducking twittering PR reps and airheaded blondes at a Miami face cream launch party, she uncovers what looks like an al-Qaeda plot, headed by a dreamy Osama bin Laden look-alike, who is either (1) a terrorist, (2) an international playboy, (3) a serial killer or (4) all of the above. Languid, mysterious Pierre Feramo returns Olivia’s interest, and thus begins an around-the-world adventure that has plucky Olivia eventually recruited by MI6. In addition to the fun spy gear,  there are kidnappings, bomb plots and scuba-diving disasters. Olivia is slim, confident and accomplished; ostensibly, she’s “painstakingly erased all womanly urges to question her shape, looks, role in life,” etc. But she still has her bumbling Jonesian moments, and though she may not need a man, she’ll get one in the end.

Winner of the Stephen Leacock Award for Humour

A terrific Canadian political satire: A burnt-out politcal aide quits just before an election–but is forced to run a hopeless campaign on the way out. He makes a deal with a crusty old Scot, Angus McLintock–an engineering professor who will do anything, anything, to avoid teaching English to engineers–to let his name stand in the election. No need to campaign, certain to lose, and so on. But Angus wins, and he decides to see what good an honest M.P. who doesn’t care about being re-elected can do in Parliament. 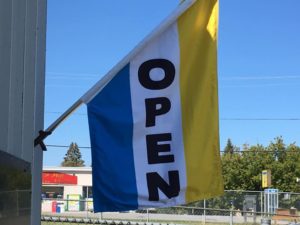 The Library is OPEN.

Accessibility by WAH
Scroll back to top